skip to main | skip to sidebar

FlickrSave: Upload your photos to Flickr from within GIMP

FlickrSave is a GIMP plugin which adds an option to directly upload a picture to Flickr. It uses Christophe Beauregard's flickr_upload tool as a backend. The plugin supports setting title, description, tags and privacy, and works in both GIMP-2.2 and GIMP-2.4RC under Linux.

More background on the plugin can be found at the end of the post, in the "Motivation" section.

In all honesty, this is more of a ugly hack than a full-fledged plugin, but it works OK. And maybe it will inspire somebody to write a better plugin. In the meantime, please use and enjoy it! 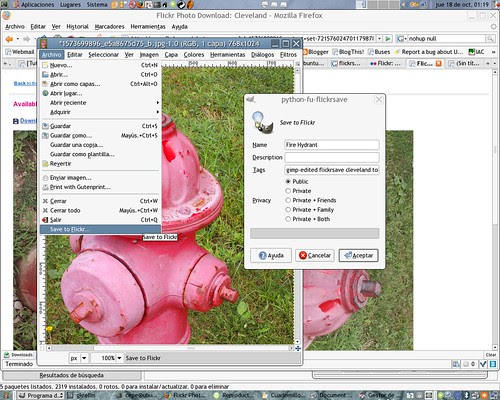 This shows FlickrSave in action. You can see the dialog, allowing you to choose title, description and tags for the image, and the added option in the menu.

The plugin depends on flickr_upload and, unfortunately, most distros don't package it. There are two possibilities for installing this tool. The recommended one is using CPAN, which only needs running a single command:

If you don't want to use CPAN, you can read the manual installation instructions here. Follow the steps outlined in that post and return here once you are done.

Once the dependencies have been met, the actual installation of the plugin is the simplest part, so you are almost there.

FlickrSave has two parts. The wrapper, flickr_upload_gimp_helper, is a shell script which does most of the work associated with calling flickr_upload. (Incidentally, editing this script will allow you to change the chosen terminal and browser program). The GIMP plugin, flickrsave.py (for GIMP-2.4RC) or flickrsave-2.2.py (for GIMP-2.2), provides the GIMP interface. You only need to copy the files to their correct places and you'll be good to go.

Not much to say here. Right click on your image and choose File, or use File from the drop-down menu. The very last option is "Save to Flickr..." Choose it and a dialog will pop up asking you for the image title, description, tags and desired privacy settings. Click Accept and the plugin will do its bidding automatically. A terminal window will pop up briefly as the image is uploaded, and, if everything goes well, the Flickr photo edit page will be opened on Firefox once it is available in your photostream.

I love taking lots of photographs, up to the point that it has become somewhat of an obsession. It's only fitting, then, than from the moment I signed up for a pro Flickr account, I never looked back. In addition to having almost 10,000 pictures uploaded (and counting), I find myself more and more involved in the community. In particular, I'm very active in A3B, a challenge-style group where I am a moderator and enthusiastic participant.

As you can guess from the number of pictures, I use Flickr for archival purposes, not as a showcase. I upload the raw pictures as they come out from the camera. Occasionally, be it as a reply to a challenge or just because I feel like it, I download a picture, retouch it and re-upload it in its newly found glory. (I have a whole bunch of photos I took from the Sears Tower on a very foggy day; they are very bland, but I recently discovered that, with some tricks, you can get gorgeous B&W pictures out of them, and I'm busy with that at the moment).

I love GNU/Linux, so the natural option for photo retouching is GIMP. However, a big pet peeve of mine was the fact that the integration between GIMP and Flickr is nil. At least, you can use the "Open Location..." option on the GIMP File menu (or the corresponding option on your browser) to save yourself the hassle of downloading the image, saving it to disk and hunting for it from within GIMP. However, there is no way you can save your images to Flickr: you have to save the image to disk and use whatever tool rows your boat to upload it. This makes the process cumbersome, to say the least.

I spent some days searching for a plugin that would add an option to GIMP to save to my Flickr account, but couldn't find any. Therefore I concocted my own solution. As I didn't have much of a clue with Python, I wrote a very simple GIMP plugin which presents an interface and invokes an external shell script which does the magic, invoking Christophe Beauregard's flickr_upload to do the hard work.

Thanks to Raphael Quinet for the CPAN suggestion.

You can reach me in andvaranaut AT gmail . com, or just leave a comment in this post. Enjoy!
Posted by CP at 9:40 PM

Gwenview in KDE can do this right out of the box.

It's probably easier to edit your images in GIMP then use Gwenview to send them to Flikr.

Hi Ashay. There are a lot of solutions which can be used once you have saved your images. F-Spot, jUploader and Uploadr come to mind. But I wanted to retouch and upload directly from within GIMP, and that's what the plugin is good for.